Facade louvers lifts the appearance of a building. This plays a massive role in how we see and use any building! Bringing a unique look to a building's exterior, while still providing shade and comfort inside. Protecting the building and the occupants from glare, heat, reflecting light and sunlight and doing so in a way that serves as an extension of the building’s design. Through different combinations and modern solutions of we are able to create visually stunning façade te
53 views 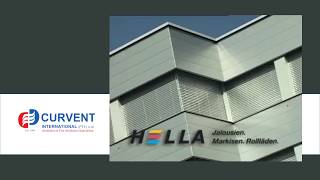 Hella, a company with its head office in Abfaltersbach, Austrian, manufactures the following automated facade products: * Venetian Blinds * Awnings * Roller Shutters and other sun and weather protection products. Curvent International is extremely excited to introduce their affiliation as distributor and installer of the automated Hella range of products. Visit Curvent's showroom at 75 North Rand Road, Hughes, Boksburg or contact the facade department on 011 826 5959 for
12 views

Located in Swaziland’s capital city, the Hilton Garden Inn Mbabane is one of the country’s most iconic buildings, referred to by locals as ‘Ship out of the Ocean'. Curvent International installed facade screens that covered the plant rooms, housing the electrical switchgear as well as the sprinkler valve chambers. The screening system consists out of a CV 101 aluminium extruded CV 101 blade fixed to the mullions using ploy clips. The mullion in turn is then fixed to a support
32 views

THE BENEFITS OF FACADE SCREENS

We are going to look at the Benefits of Ventilated Facades and Rain Screens. And why they are becoming enormously popular in modern commercial and also domestic architecture. The right building façade/cladding offers significant technical and architectural advantages and can completely alter the appearance of an ordinary building to a stunning masterpiece. A building’s façade fulfils a massive role in how we recognize and occupy the building. When visible from a street it p
374 views

Waterfall City is a new city development which is conveniently located between Sandton and Pretoria with easy access - via Allandale Road - to the N1 highway. It is the largest urban concept development in South Africa and aims to be a truly integrated mixed-use development that focuses on best-practice Urban Design Principles to create a pleasant and sustainable live/work environment. The project site is located at the main entrance and gateway to the broader Waterfall City
61 views

A facade is generally one exterior side of a building, usually, but not always, the front. It is a foreign loan word from the French façade, which means "frontage" or "face". (Wikipedia) In architecture, the facade of a building is often the most important aspect from a design standpoint, as it sets the tone for the rest of the building. From the engineering perspective of a building, the facade is also of great importance due to its impact on energy efficiency. Facade Struct
56 views

Save on cooling and electricity costs with solar protection solutions. Curvent International provides attractive shading solutions that reroute punishing ultraviolet light away from your windows and help keep your interior temperatures at a more comfortable level. At the same time, they let in the natural sunlight that keeps your work crew alert and productive. We have just completed the Facade Technology instillation at the AHRLAC Manufacturing Facility, Wonderboom Airport,
141 views

Curvent International (PTY) Ltd fitted and installed CV101 Louvre Systems for WBHO Construction at the Time Square, Menlyn Maine, Pretoria. This project was done at the Time Square's casino plant rooms. The main focus of this facade installations was for aesthetic appeal but on a secondary level it also helped to divert direct sunlight away from the building. The CV101 Louvre System consists out of aluminium mullions, polycarbonate clips and aluminium extruded blades. These c
49 views

HOW TO CONTROL DIRECT SUNLIGHT TO ENSURE A COMFORTABLE WORKSPACE

Direct sun in the workplace is almost always a comfort problem. Uncomfortable occupants will be less productive, close their window coverings, bring in energy-using portable fans, and reduce thermostat setting if possible. Good shading means occupants will have minimal complaints. Shading reduces glare and can be accomplished by the use of: Exterior Devices Devices In the Window Pane Interior Devices Curvent International provides attractive exterior shading solutions that re
196 views